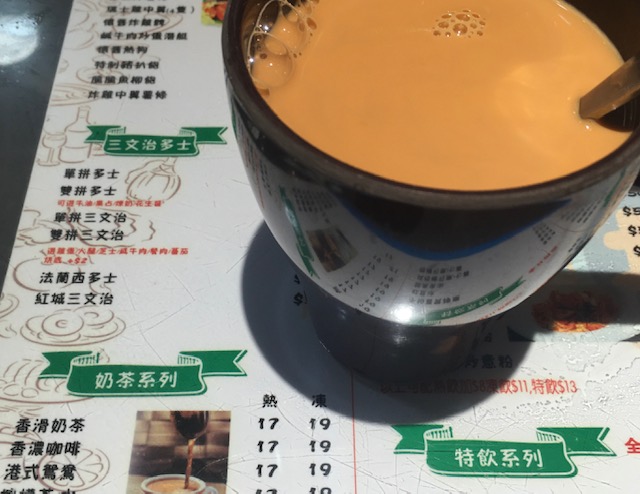 Sometimes I have my breakfast in a restaurant which is right next to my office building. This is a typical Hong Kong restaurant where you see locals most of the time. The menu is usually placed underneath the glass top of the table. You sit down, you read the menu, and you order your food. In this restaurant, most of the service staff look quite senior in age. And Cantonese is the default language in this restaurant.

A couple of days ago, when I was having my breakfast there, I witnessed something quite interesting.

There were only a few people in the restaurant at the time. I was sitting somewhere close to the window, and noticed two young people came in and sat down at a table not far from me. They were not Chinese. The guy was white and the girl had a dark complexion. The waitress who took them to the table was probably in her late fifties and didn’t speak English. Noticing that these two customers were not Chinese, she handed them a copy of the English menu.

I overheard these two people discussing, in English, what options they had. Then they were ready to order. It was the girl who tried. She spoke to the waitress in Cantonese, rather slowly but clearly, saying that she was a vegetarian, and would like to order... But she did not get to finish.

There was a gentleman sitting not far from their table came over and offered his help. (I am not the only one who noticed them!) He told the girl that she could speak English with him and he would translate her order to Cantonese. And that was how the story ended. He ordered the breakfast for them. He was so sincere and eager to help.

But, the whole thing made me feel sorry for the girl. It was clear that the girl was learning Cantonese and wanted to try her language skills in a restaurant frequented by the locals. She did not seem to come in this restaurant by chance. And she looked calm and knew what she was doing. It would have been a priceless moment for her if she handled everything herself. She might struggle a little bit, but she would have made it work nonetheless, if the kindhearted gentleman did not get himself involved.

This reminded me those priceless moments my students told me, small achievements like they successfully bought train tickets, told the taxi drivers where to go, ordered the food in a restaurant, or bargained down the price. I could always feel the excitement coming out of their voices. They used their Mandarin, and people understood them! Mandarin worked!

Things like that are priceless for language learners. It justifies every effort they have made.

Unfortunately, that girl’s priceless moment on that morning was taken away inadvertently. I hope she keeps trying, and perhaps next time she can thank the gentleman and tell him that she’d like to try her Cantonese.