Can you judge a book by its cover?

There are many Chinese textbooks for non-Chinese speakers to learn Mandarin, and a number of them use ancient Chinese cultural symbols on their book covers, such as the Great Wall, dragons, or part of the forbidden city, and etc. These images are meant to represent Chinese culture, which is one of the reasons that people take Mandarin lessons. However, even though Chinese language and culture are closely related, using ancient cultural symbols is, in fact, one way to separate the culture from the language.

An extreme example is the ancient Egyptian culture, which was magnificent and mysterious. If someone is interested to know more about the pyramids and the mummies, she could pick up a book written in her own language, and read about it. Or she could take a guided tour in Egypt. She does not need to learn old Egyptian language for the purpose of learning the culture. Indeed, except scholars, no one is studying old Egyptian language. Even the Egyptians use Arabic to communicate. Old Egyptian language has become a kind of privileged cultural knowledge belonging to the academic world.

There are similarities between ancient Egyptian culture and Chinese culture. However, a huge difference is that Chinese culture has stayed on from its ancient form, and is still alive. Numerous ancient cultural motifs are still present in today’s culture, while at the same time, subtle changes happen constantly. Millions of Chinese people still use Chinese language to communicate. They still study old Chinese texts, which, fortunately, are not fenced in by academic scholars, at least not yet.

Therefore, Chinese culture is both ancient and new, both unchanged and changed, both mysterious and straightforward, both magnificent and ordinary. If we hang on to the ancient, unchanged and mysterious side, which is represented by the terra-cotta warriors and dragons, we have no reason to teach or learn Mandarin. We only need to read about them, or watch some TV programs. Only when Chinese culture is considered as lively and dynamic, it will make sense to learn Mandarin. Mandarin opens up a path for direct involvement in Chinese culture, the first hand experiences.

For this reason, dragons, as magnificent as they are, are no longer suitable to act as a spoken person for teaching and learning Mandarin. We do not need to fetishise old relics and indoctrinate ourselves with all the age old cultural stereotypes when we can find something current and more representative, something both ordinary and extraordinary.

This is what I did with Mandarin Express series. The images I used as book covers are snapshots of ordinary people’s daily lives, including market scenes, street scenes, exterior and interior of buildings, different seasons, different geographical terrains, and arts.

For example, in this book cover, a regular Chinese woman is featured in the center of the image. Her gesture and facial expression are a display of friendliness and confidence. She looks healthy and happy. Her clothes are common day-to-day attires of young people.

In this book cover, another woman is featured in the image. She is looking into the deli stand for possible purchases. She is well dressed and her hair is well maintained. She is carrying a nice, big handbag. The image also shows that this deli stand is located at a busy street, and it is full of Chinese delicacies.

Different from dragons, these are real people with their life stories to tell. Moreover, upon presenting these images to a Chinese language class, their differences are immediate. They are Chinese people and they live in different cultural environments. Chinese language is one of the strands of their day to day encounters. These images make daily cultural environments real and visible to students. They are the people students will encounter and communicate with.

Then what do we do with the ancient cultural symbols? We are not going to discard them. They are the other side of the coin. Without dragons and terra-cotta warriors, Chinese culture would not be complete.

One possible way is to put them side by side with other countries’ historical cultural images, such as what I did with the Great Wall. 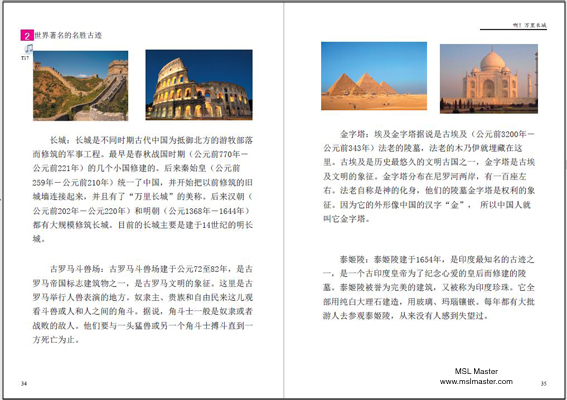 It is next to the pyramids, Colosseum, and Taj Mahal. All these sites are well known to the students. Reading it in Chinese is only an added layer to their existing knowledge. It is much better than just reading about the Great Wall. As we said earlier, you don’t have to learn Mandarin to know more about the Great Wall.