How many Chinese characters do you need to learn?

For beginner students who just start learning reading and writing Chinese, we do have an answer for this question, that they start with learning 320 Chinese characters. However, it should be made clear that this is not the most crucial aspect of their learning.

In his preface to Beginning Chinese Reader, John DeFrancis wrote that the numbers game played by asking the question “How many characters do you know?” is generally amateurish and ignores the fact that the simple question is actually quite complex. Questions which should be asked but are often neglected are “How many combinations of characters do you know?” and “How much actual reading have you done?”

He said that being exposed to a character in a textbook is not really “knowing” that character. “Knowing” a character means to understand the way in which a character enters into combinations, performs varied functions in a sentence, or has acquired particular cultural connotations.

That is what we need in learning a Chinese character, to gain an extended understanding, to acquire an adequate knowledge of the richness of usages and meanings attached to individual characters.

At MSL Master, we can’t agree more. Moreover, what DeFrancis said also points out the limitation of a single Chinese character that, when standing alone, does not convey a great deal of information.

April Zhang followed what DeFrancis did before and made some improvements in certain areas. The first issue she realised is that all DeFrancis’ books are as thick as a brick and look daunting and intimidating. Also, after passing a threshold, learning characters according to occurring frequency becomes increasingly inefficient. The top 500 characters count for 72.1% - 79.2% of the characters occurring, while the next 500 characters for only 11.9% - 14.1%. Yet students have to spend considerably longer time and more energy to study the 2nd 500 characters.

On completing the Chinese Reading and Writing series, students will have achieved a sizeable mass of Chinese characters which account for a high combined occurring frequency, and that will enable them to take a different learning path.

An extended understanding of Chinese characters

Learning Chinese reading and writing goes beyond learning a list of characters. The real focus is on learning combinations and on reading Chinese texts. 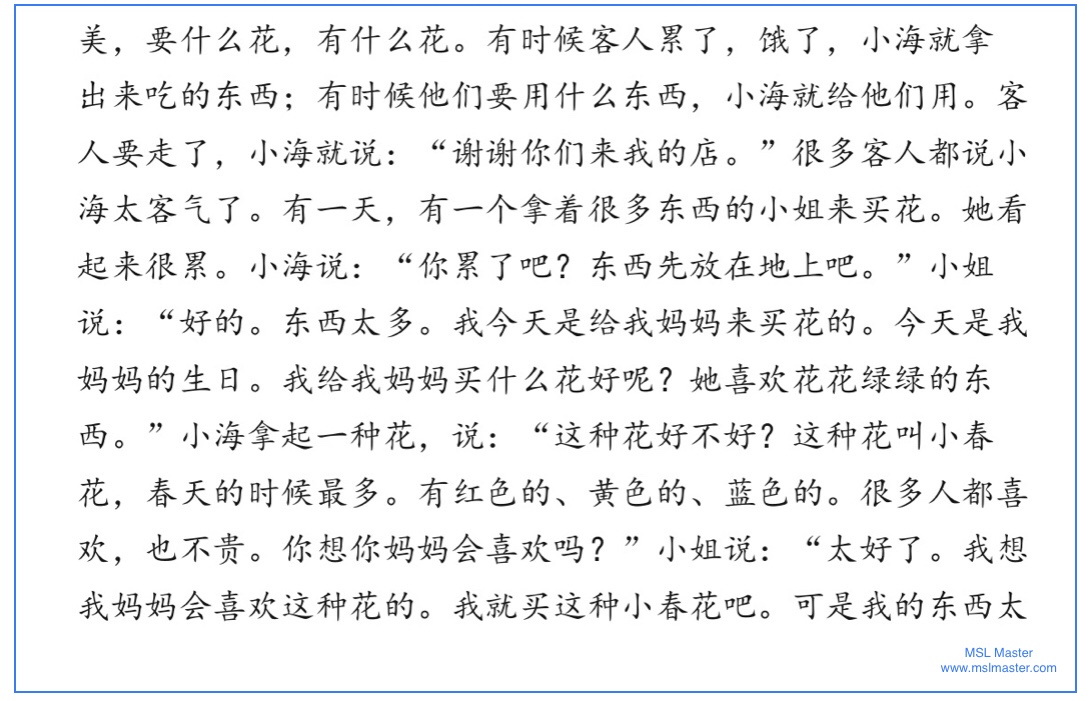 Therefore, each Chinese Reading and Writing book uses a structure very simple and powerful. Each lesson presents around 10 characters, followed by words, sentences, conversations, and stories. Great effort was taken to make sure that the content is interesting and engaging. Attention is paid to: (1) all the illustrations are strictly confined to the characters already presented; (2) illustrations are not above students’ level.

With each book completed, students gain a deeper understanding on Chinese language, and develop necessary skills in reading and writing Chinese text.

On completing the whole series of Chinese Reading and Writing, students will be at a new level, able to continue their study with Mandarin Express Pre-Intermediate Level A, a character based Chinese textbook.