Written by April Zhang on Sunday, 02 May 2021. Posted in Front Page 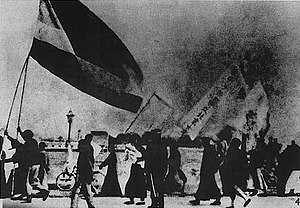 Recently, film maker Chloe Zhao brought the classical Chinese to the center of the world! During her Oscar speech, she cited a line from a famous text, which most Chinese learners don’t know about. I think this is a good opportunity to explain what had happened to the teaching and learning Chinese, and to commemorate the May Fourth Movement 102 years ago.

May Fourth Movement happened on May 4th, 1919. It didn’t end there.

The story started with the First World War. During the War, China made significant contributions to the Allied Powers. In November 1918, the War ended. The Allied Powers won. Germany lost. Around that time, Germany occupied Shangdong area in China. Naturally, Chinese people thought that, as being part of the victorious side, the Shangdong area occupied by Germany would be returned to China. However, things didn’t go that way.

With the support of the US, the UK and France, the Treaty of Versailles passed the German interests in Shandong to the Japanese. China remained a loser.

When the news reached Beijing, people were outraged. On May 4th, 1919, many university students went to the streets to protest against the stipulation of the Versailles Treaty. Their protest is later to be known as the May Fourth Movement. Many political, cultural and social changes have been attributed to this movement, including Chinese teaching and learning.

To understand the impact of the May Fourth Movement on teaching and learning Chinese, we need to know that, before 1920s, there were two versions of Chinese coexisting in China. One was vernacular Chinese (白话) which was used in daily conversations, and the other was classical Chinese (古文) which was used in writings. At schools, students studied classical texts. When they talked to one another they use vernacular Chinese. These two versions of Chinese are quite different.

Back then, classical texts were almost entirely unpunctuated. It was common for school children to read aloud the texts while moving their heads left and right without understanding a thing. Very often, teachers simply asked students to memorise the whole book without giving any explanations of the texts.

If learning Chinese was hard for Chinese children back then, imagine how hard it would be for non-Chinese speakers.

Still, a few non-Chinese speakers had a great grasp of classical Chinese. Such as James Flint, one of the first English people who learned Mandarin Chinese. In 1759, he was sent by the East India Company to visit Emperor Qiang Long, and he wrote a complaint letter to the Emperor. That letter must be written in classical Chinese.

China was a weak country during the final years of Qing Dynasty all the way to the Republic era, and was attacked by everyone. The misery of the country prompted many ablest persons to make effort to change China for the better. Education was one of the areas to be changed.

Because classical Chinese texts were so difficult to learn and so far away from the daily life, it was considered as one of the obstacles which were hindering social progress. Vernacular Chinese was called for as the written form. But only a small number of publications were using vernacular Chinese.

Finally, the sea change came with the May Fourth Movement.

Around the late 1920s, nearly all Chinese newspapers, books, and official documents were written in vernacular Chinese. A punctuation system, which was modelled after European languages, was widely accepted. A new grammar system, also modelled after European languages, was established as the theoretical framework of the vernacular Chinese (although, after teaching Chinese for so many years, I now believe that Latin grammar isn’t really a good fit for Chinese). Great thinkers and writers, such as Hu Shih (胡适), Lu Xun (鲁迅), and Chen Duxiu (陈独秀), became the representatives of a new cultural front. They basically defined Mandarin Chinese as we teach and learn today. Moreover, Qian Xuantong (钱玄同) pushed hard to simplify the Chinese characters.

On the Chinese teaching and learning side, both Chinese and non-Chinese speakers have had an easier time ever since. It has some drawbacks.

For native Chinese students, classical Chinese texts now take up a small portion of a 12-year school Chinese curriculum. Students are no longer required to write in the classical format. Except those who make classical Chinese texts their specialty, few people have full capacity of reading classical texts. Those intellectuals who drove forward the putonghua teaching and learning probably did not see this coming, that, one hundred years later, most people are no longer able to read classical texts.

Although brilliant works have been written in the last 100 years using vernacular Chinese, it is still a pity when we consider that there is such a rich collection of classical Chinese texts of more than 2000 years, which suddenly became nearly inaccessible to many people.

I think it would be really nice for non-Chinese speaking students also to know a bit about classical Chinese.

Unexpectedly, film maker Chloe Zhao did it. Her film Nomandland won Oscar’s best picture and best director award this year. In her speech, she cited six characters, “人之初, 性本善”, from a classic children’s textbook 《三字经》, and talked about the deep impact her childhood learning has had on how she viewed the world. It was quite an occasion for a girl growing up in China.

For me to connect with Chloe needs a bit of stretch. :-)

Nevertheless, I am glad to say that Mandarin Express Intermediate Level B includes a good chunk of the 《三字经》, the very first selection as a matter of fact, and also many other best works throughout history. For anyone who is using the Mandarin Express series, he/she will be hugely rewarded when they get to this book!